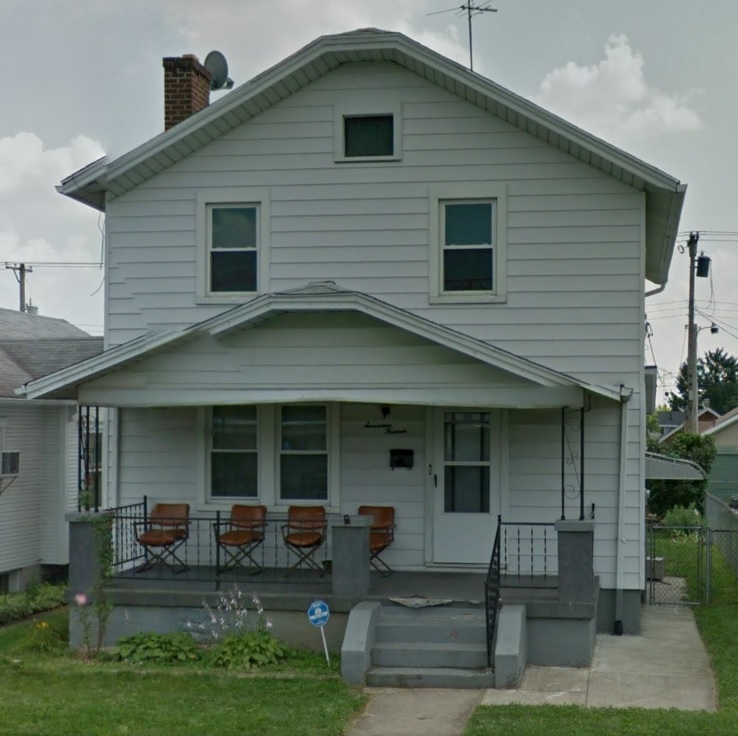 I thought you all would enjoy a few pictures of the latest project.

My property manager referred this house to me. Several real estate agents declined to list it. One of them got permission to have me contact the owners and see if I could help. It’s in the Huber Heights suburb of Dayton,  so that’s a good one to look at. It could be a retail sale, or a good rental.

The owner told me on the phone there was a bunch of “stuff” in the house. That didn’t really worry me. When they told me that several agents had declined the listing I got concerned. There are plenty of real estate agents that will list anything at any price, reasonable or not.

Once I get there, the exterior of the house looks normal. I decide to open the garage and go through there first. The garage is got stuff in it, but not bad. My garage at home is worse.

I tried to open the door to the kitchen, and only got it open about 12 inches.

I stuck my head in and got this picture.

Rather than crawling through here, I decided to try the front door, hoping to find a path.

I got the front door open enough to squeeze in, but there’s no path. Just a small mountain.

There’s about 2 feet between the top and the ceiling. After I climb to the top and take a look, What do you think I found?

Yep, more of the same. 4 – 5 feet deep through the entire house. Every room is full of stuff. How many 40 yard dumpsters will this one take? At least 3, maybe 4.

I still haven’t finalized my exit strategy on this one. I’m not keeping it as a rental, so the question is how far do I go before I market it?

Trash it out and sell it Wholesale?

Do a partial rehab, then sell it to a homeowner as a fixer?

Or do I finish a full rehab and sell it full retail?

What do you think?

I just cancelled my property sale.

First, a little background. I bought a property as a short sale a couple months ago, closed at the bank’s title co, got the HUD, paid the bank, and the mortgage is released. I titled the property in a Land Trust with my LLC as Trustee, and me as the beneficiary. It’s a cash purchase, so I have no mortgage on the property. Just another routine transaction. Or so I thought.

I did my marketing, found a buyer (I used an agent this time), signed a contract, etc. Buyer selects Lawyers Title, where the buyer has done multiple transactions. Nice and routine, just the way I like it.

Silently my head is screaming “Huh? Hello? Have you ever done a Land Trust before?”  Verbally, I tried to explain that a land trust is gives the beneficiary PRIVACY, so as to NOT put their name in the public record. I’ve done this many times, and putting the beneficiary in the public record has NEVER been needed to sell a property. Nor, has any additional written permission been needed, as the Land Trust already covers that. After a brief conversation, it ended with “That’s what our Attorney said.”  While the voices in my head are screaming “Your attorney is an idiot!” I’m calmly asking to speak with the attorney. She promises to have him call me.

And the attorney calls. And I repeat the previous conversation. So he quotes the Memorandum of Land Trust, “With the consent of the Beneficiary, the Trustee shall have the power to….sell the property”. He reads it to say the beneficiary must give additional permission, I read it to say the beneficiary gave permission by creating the trust. Deadlocked. Not a big deal though, I can give myself permission if it makes them happy. However, the attorney continues to insist the beneficiary info gets attached to the Deed. But don’t worry he says, “it’s an attachment. Nobody would really look through the attachments.”

Really? Then why bother with the attachment? This is a sign of problems. Are there more?

Meanwhile, having kept my infinitely patient and smart agent in the loop, my agent is talking with the Title Co, and gets some additional info. The underwriting guidelines are the issue. After three phone calls and 30 minutes of conversation with the title company and the attorney (and no attorney bill) he’s never mentioned he’s following the underwriting guidelines. He’s been giving me the impression that this is a legal issue. (attaching the beneficiary info to the deed is NOT in the guideline)

And now it gets even better. What they had not told me yet, was in addition to the issues already at hand, the underwriting guideline states the original owner (the seller I bought the property from) must sign the new HUD. It’s not like they actually signed a HUD and a deed at a closing at a title company already. Oh, wait, they did. Apparently being the beneficiary and the trustee isn’t good enough. The PREVIOUS owner must sign off on the following sale.

Here’s the BEST part, because there is not enough already. The proceeds check gets written payable to the trustee and the PREVIOUS owner. Hello? I PAID the seller for the property already. I own it. WTF do I need the previous owners signature to sell it. AND you want to make the check out to both of us? Really? How intelligent is that? How do you think that conversation would go?

“Hey, I bought your house at the short sale a while back and you didn’t get any cash. Now I’m selling it for a profit, and the title co is going to make a check out to both of us and you need to sign it over to me.”

I can see that going really smoothly.

Making a check out to the Trustee and the Beneficiary, while still wrong, is more logical.

I read the guideline. The problem is the assumption made by the underwriter in the beginning of the guideline. The underwriter assumes that because a land trust is sometimes involved in a distressed property, “subject to” or “short sale” situation, that ALL land trusts are treated as something questionable. Their presumption is that ALL land trust transactions are a problem. This is the same as saying some people in sports cars speed, so treat all sports cars as speeders. You sir, are presumed guilty, and will be treated as such.

At this point, it becomes obvious I cannot surmount these problems. So, I give the seller the opportunity to choose another Title co. He declines, and his agent requests a release of contract and earnest money, and of course, I comply. He was not the culprit here.

So who’s at fault in this fiasco? Clearly it’s not the buyers fault. Do I blame the local Title Co office? No, they are following the Underwriter guidelines as they are required to do. However, they chose their underwriter. Do I blame their local attorney? No, he’s following the same guidelines. The real problem is with a single bozo or underwriting counsel that wrote the guideline in the first place. They made a lot of assumptions, and applied them incorrectly to all Land Trusts, not just the ones at issue.

They decided that because a Land Trust has been used in one type of potentially problematic transaction, that all Land Trusts are a problem. Had they wrote the guideline to say that a specific type of transaction is the issue, and a Land Trust may be an indicator, then they would be on better footing.

So what’s the result here? The buyer lost a great deal. The Title Co lost this closing and any future closing from me. The buyer’s agent lost a commission. The seller lost a couple weeks of time and needs to find another buyer.